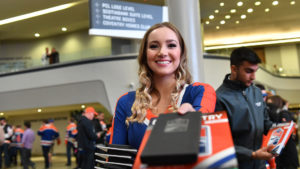 Opening what can only be described as a historic day, the Oilers Entertainment Group held an official unveiling of the Oilers Hall of Fame room, revealed the Gretzky Statue’s new location and announced the addition of Wayne Gretzky as the organization’s newest Partner and Vice Chair.

But that was just the start.

As people crowded the streets near Rogers Place hours before doors opened, it was evident that fans could not wait to be a part of this momentous day.

From lining up to get photos with Edmonton’s favourite lynx and Oilers new mascot, Hunter, to visiting the Molson Hockey House — a beer garden inside Ford Hall open to ticket holders and non-ticket holders alike — the energy created by the fans before the game was unparalleled.

This energy was transported into the bowl, with an in-game production unlike anything Oiler fans have seen before. 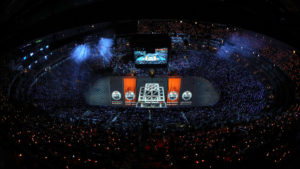 Orange, blue and white shirts draped over each seat in a formation that, together, created a giant logo throughout the lower bowl. Fans were not only met by this keepsake t-shirt, but also an LED Rogers Place wrist band.

Inviting fans to participate in the ceremony, the LED bands lit-up in unison with a thunderous drumming emitted by the surround sound system, which fully immersed fans into the presentation on the ice.

Projecting captivating, Northern Light–reminiscent graphics that glistened across the ice, along with matching visuals that danced across the massive, high-definition LED scoreboard and along the ribbon boards, the ceremonial Home Opener production left those in attendance with chills.

The chills didn’t stop there.

Using historic audio from the Northlands Coliseum era, Wayne Gretzky and Mark Messier were the first to skate across the ice — stopping to give a stick salute to the thousands of cheering fans. 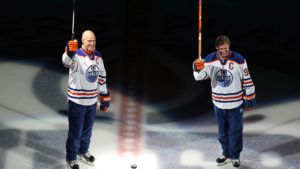 With the sound of Daryl Katz explaining the vision behind ICE District, the projections then showed blue-print renderings of buildings, which seemingly emerged from the ice. Ending on the note of marking a new era for Edmonton, Connor McDavid took to the ice.

The LED wrist bands suddenly erupted in white flashes, the spotlight following McDavid, while the fans exploded in an emotional cheer.

The rest of the team joined their new captain in the warm-up skate before a ceremonial puck-drop with Joey Moss and Fred Lynch, a Season Seat Holder since 1979, concluding the formal part of the night.

To cap off the evening, the Oilers took the win, beating the Flames 7-4. The perfect ending to an opening night.