EDMONTON, AB – As smoke filtered in from the tunnel, the 1984-85 Oilers, albeit a bit greyer than those days of their youth, filtered in as well – hoisting the Stanley Cup, passing it from teammate to teammate.

It was a blast from the past, and amidst the lights and smoke you could say it was almost like a dream.

The 1984-85 Oilers were voted by NHL fans as the greatest team of the century. Such an honour demanded a big celebration, and Sunday evening in Edmonton provided just that.

Standard definition highlights of that super-skilled roster graced the massive high definition Rogers Place centre-hung scoreboard, before the architect and leader of that team Glen Sather got up to speak.

“I love it here,” said Sather, to the applause of the thousands in attendance. The players and guests continued to provide fond memories of the city of Edmonton and the fans of the team, throughout the night.

Celebrities such as Hall of Fame basketball player Magic Johnson, actors Kiefer Sutherland and Michael J. Fox, and country singer Garth Brooks also appeared on the screen to give their congratulations and thoughts of the 84-85 team.

But the best part of the night was listening to great players share their thoughts on the successes of that roster.

“We just practiced, played and had fun together,” said former captain Wayne Gretzky. “Nobody had an ego. It was really just a close group, and that’s what made it so special.” 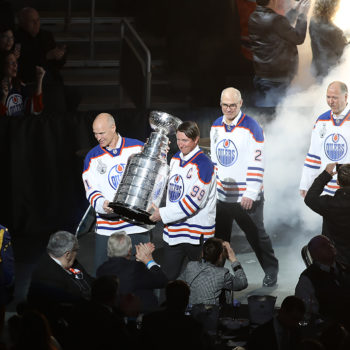 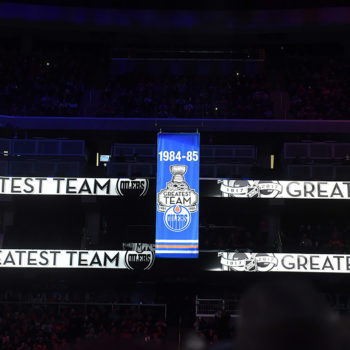 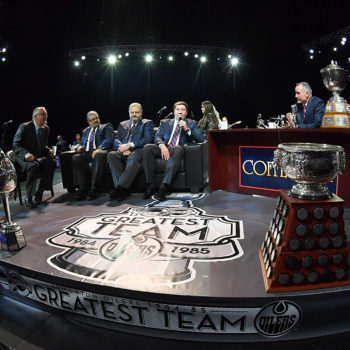 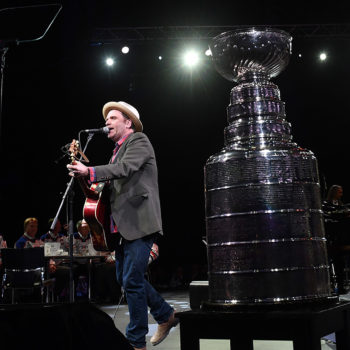 Despite the talent and scoring power they had, the 84-85 Oilers never coasted into a game.

“It never felt easy to us,” said former forward Mark Messier. “Everybody felt we were such a great team.

“The fear of losing was already in the back of our minds because what we had experienced the year before. That was a driver for us.”

Coming off their first Stanley Cup championship in franchise history in 1984, the 84-85 squad went into the season knowing there was a target on their back. That didn’t deter them from greatness, but rather pushed them toward it.

“We were hungry,” said Messier.

When asked how the team learned to win, former defenceman Kevin Lowe interjected with a funny notion.

“The true answer is, when we won, we could go out and have fun,” said Lowe. “When we lost we couldn’t. So it was quite simple. If you won a hockey game, you could go out to the bar and if you didn’t you’d have to go home and twiddle your thumbs. We learned not to lose.”

Lowe may have been somewhat joking, but it did provide the truth that back in 1984, these were just kids having fun, being the best in the League.

The night continued on with more story swapping and guest speakers. Fan favourite and former Oilers forward Ryan Smyth came on stage to talk about his hockey idols.

Midway through the program, the players gathered behind the Stanley Cup to pay tribute to their former teammate Dave Semenko, who passed away this summer after a brief battle with cancer.

Former forward Dave Hunter read a speech remembering the enforcer as a protector and a man who would do anything for his teammates.

“He was the truest, warmest friend who we could have hoped for,” said Hunter.

Earlier in the day, the Edmonton Oilers Community Foundation donated $325,000 in support of the Semenko Legacy Project.

Later in the program, Paul Coffey hosted a segment of the night called “Coffey Talk,” in which the legendary defenceman grilled a few of his teammates in a late-night talk-show setup.

And following that, the hosts interviewed key members of the Oilers who were added to help build to the dynasty, such as Mike Krushelnyski, who was acquired in June of 1984. He said being “traded to the Oilers” was the best thing to ever happened to him.

Toward the end of the night, Sather returned to the stage to sit alongside former coach of the Philadelphia Flyers Mike Keenan. The two coached against each other during the 1985 Stanley Cup Final, in which the Oilers bested the Flyers in five games after losing Game 1, 4-1.

“I wasn’t happy about it,” Sather said of that loss. “I think that game I put Esa Tikkanen in the lineup and they were so busy trying to kill Esa that they forgot about playing hockey and our guys started to get going.”

As the night came to a close, NHL Deputy Commissioner Bill Daly came on stage to give an official statement on behalf of the NHL, before calling on Gretzky and Messier to join him. Then, with much fanfare, a banner was raised to honour the Greatest Team.

Confetti fell, music played, and the 84-85 Oilers celebrated their achievements together as a team. It was truly a great night for a great group of players who have cemented themselves in the history of the NHL.