Tickets On Sale Starting Friday, December 17th at 10AM Local Time on Ticketmaster.com 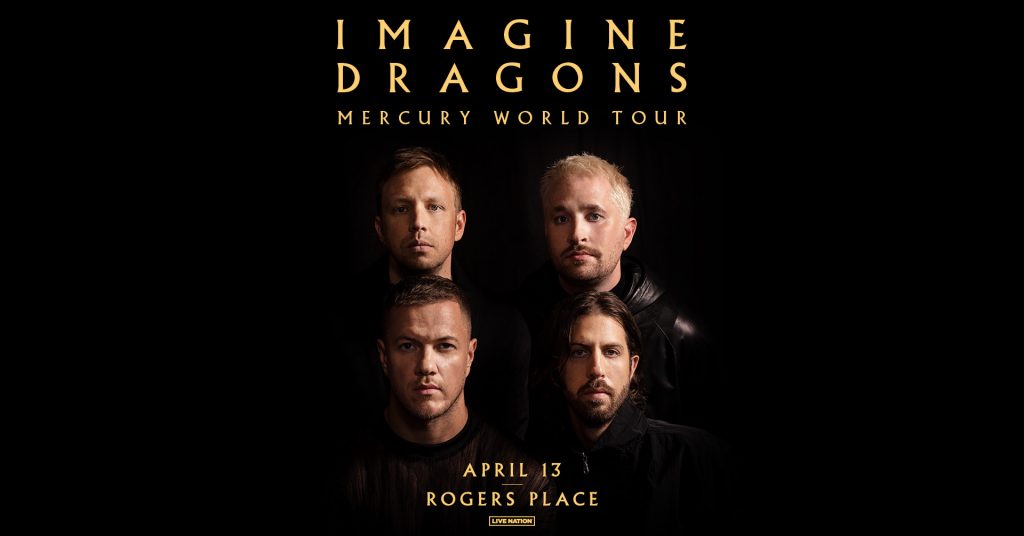 Due to popular demand, Imagine Dragons has added 9 additional shows to their Mercury World Tour tour across Canada in Victoria, Ottawa, Quebec City and more. Produced by Live Nation, the 2022 tour kicks off on February 6th at FTX Arena in Miami, FL making stops across North America in Raleigh, Milwaukee, Minneapolis, and more before wrapping up April 28th in Moncton, NB at Avenir Centre. The entire tour includes a total of 26 dates and celebrates the release of their latest album, Mercury – Act 1.

​​With 49 million albums and 55 million songs sold globally, as well as 75 billion combined streams, Imagine Dragons remains one of the best-selling rock bands, reinventing the genre with their enormous breakout success across the 2010s. Billboard’s Top 3 rock songs of the decade belonged to the band – “Believer,” “Thunder” and “Radioactive.” Formed in 2009, Imagine Dragons developed a grassroots following with a series of independently released EPs before making their major label debut on KIDinaKORNER/Interscope with the 2012 EP Continued Silence. Night Visions, their 2012 full-length debut, entered the Billboard 200 at No. 2 and the lead-off track “Radioactive” topped Billboard’s Hot Rock Songs chart, won a GRAMMY for Best Rock Performance, and achieved RIAA Diamond status. 2015’s Smoke + Mirrors debuted at No. 1 on the Billboard 200. EVOLVE, which followed in 2017, earned a GRAMMY nomination for Best Pop Vocal Album and unleashed three No. 1 Alternative radio hits: “Believer,” the GRAMMY-nominated “Thunder” and “Whatever It Takes.” All three songs were also top 5 hits at Top 40 radio, with “Thunder” rising to the No. 1 spot. The band’s fourth album, ORIGINS, debuted atop Billboard’s Alternative Albums and Top Rock Albums charts and lead single “Natural” spent nine weeks at No. 1 at alternative radio and set the current record for all-time “most spins in a week” at the format.

Their highly anticipated fifth studio album Mercury – Act 1 was released on September 3, 2021. Teaming up with esteemed producer Rick Rubin and with its title drawing inspiration from the word “mercurial,” Mercury – Act 1is a candid album that abandons metaphorically charged lyrics and instead embraces emotional extremities, holding nothing back. It marks the band’s first album since 2018’s ORIGINS.

“Follow You” and “Cutthroat” were the first glimpses into the new record, released simultaneously in March 2021, with the former hitting No. 1 at alternative radio and Billboard’s Alternative Airplay chart, marking the band’s quickest ascent to the top of those charts. The album’s current single, “Wrecked,” is a confessional exploration of grief, written by lead vocalist Dan Reynolds after losing his sister-in-law to cancer in 2019.