It’s just after 8:00 AM Monday when former U.S. President Jimmy Carter spoke the final sentence of his morning devotion to kick off the first day of the Carter Work Project in the Laurel neighbourhood here in Edmonton.

“Now, let’s go build some houses,” he said ultra-enthusiastically in his 92-year-old voice.

Then, after climbing down a few steps, President Carter led a team of 1,000 volunteers south of The Meadows Recreation Centre to the Habitat for Humanity Carter Work Project build site where lumber, nails and hammers were waiting. The Edmonton Oilers Community Foundation (EOCF) has invested $250,000 in the project, thanks to generous 50/50 jackpots during Oilers home playoff games this past season. But there’s more: 125 Oilers Entertainment Group (OEG) employees – senior management, Edmonton Oilers players, Oilers Alumni, Edmonton Oil Kings coaches, EOCF Board Members and OEG – are tightly lacing their steel-toed boots during the week and building two homes from the ground up.

President Carter and his wife, former first lady, Rosalynn, started their love affair with Habitat for Humanity- and, indeed: it’s a love affair – in 1984, three years after they left the Oval Office in The White House.

Their visit to Edmonton is their 34th annual build, and they have already built homes worldwide. In fact, a group of volunteers have been travelling alongside the Carters to build wherever they are building for several years. 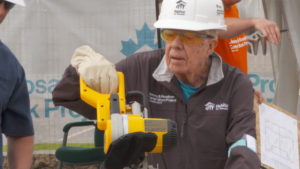 Former U.S. President Jimmy Carter never sits on the sidelines during his Habitat for Humanity projects

Habitat for Humanity’s Carter Work Project is building 150 homes across Canada this year in recognition of Canada’s sesquicentennial birthday. A total of 75 homes will be built in the Edmonton and Fort Saskatchewan, and that lofty number was a significant factor in the Carter’s decision to come to Edmonton. The Carter’s actions are inspiring and most remarkable.

Married now for 71 years, they are actively involved – swinging hammers, lifting lumber and working as a team – to build houses, which then become comfortable and individual homes for families. Habitat for Humanity is known for having families help build their own home and then assuming mortgage payments.

While patrolling the oceans in the U.S. Navy before becoming President in 1977, President Carter did so with a strong Christian faith. It perhaps is even stronger today.

In his morning devotional, he spoke a lot about his faith to the army of volunteers and how it’s so very important to love people.

The Carters example of community and stressing the importance of families having a home will be a constant reminder and motivation for all volunteers throughout the week.

It’s a community building a community, really. And the fact it is led by people as caring as Jimmy and Rosalynn Carter wraps the project with compassion and tremendous integrity.