Meet the team in live entertainment

Bringing in the acts to Rogers Place may begin with Way, but she will be the first to tell you that it is a team effort to plan and execute an event at Rogers Place.

“James is dynamite!” Way described the newly hired Marketing Manager, James McCurdy, for Rogers Place. “This guy has an appetite, he gets it, he wants to electrify everything.”

While McCurdy executes the marketing side of an event, Way says the process really begins with Mark Wiens.

“Mark is our numbers guy,” she said.

As Assistant Controller for Rogers Place, Wiens calculates the financial model for different acts coming into Rogers Place. A critical step before booking an event, Wiens helps to identify which events make sense for the arena.

“Knowing we’re going to be a part of this!”

Coming from Northlands, Wiens has over nine-and-a-half years of experience working in the live entertainment industry and says he is more than excited for the future of Rogers Place.

“Everyday you come in and there’s always something new happening.”

When asked why he wanted to work at Rogers Place, Wiens added, “All the excitement — knowing we’re going to be a part of this!”

Once the numbers are crunched by Wiens, Way describes how a deal or pitch is then made with the promoter to “bring the show in,” and then moves into the planning stages for ticketing, scaling of the venue, etc.

Shannan McAuley, Rogers Place Manager of Booking Administration, manages all of the calendar bookings for the new facility. 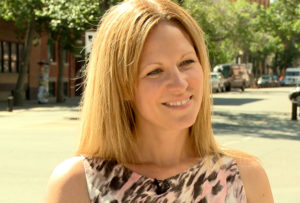 Coming from an administrative and accounting background, the live entertainment industry is a new, fast and exhilarating field that McAuley has quickly learned to adjust to.

Although only a handful of acts have been announced so far, there are many more events scheduled for Rogers Place beyond the opening window.

What keeps McAuley cool and composed even while looking at one of the busiest calendars one could imagine? — Teamwork.

“Just the people. The teamwork [here] is awesome.”

Once the schedule is sorted, the next step in the event-booking process involves the messaging.

“We want the message to be really strong and unified,” Way said.

This is when McCurdy, Marketing Manager for Rogers Place, steps in.

“We really want to make the community feel like Rogers Place is their home and they can come [here] — something that they can come explore and be a part of.”

Coming from a background with Edmonton Tourism, McCurdy is eager to share this great attraction — that is Rogers Place — with Edmontonians and visitors to the city.

“People from all over Western Canada will want to come to Edmonton to check out these great acts, but also take in a world-class facility and see what that’s all about,” added McCurdy.

“We really want to make the community feel like Rogers Place is their home and they can come [here] — something that they can come explore and be a part of.”

As Marketing Manager, McCurdy not only ensures messaging for upcoming events are clear and consistent across all forums, he also works to inform the public on all offerings at Rogers Place:

“Helping people understand all the great aspects of [Rogers Place]. Whether it be the LEED-certification or the great food and beverage options that’s going to be in there.”

Echoing the words of his colleagues, McCurdy describes the dynamic team behind live entertainment at Rogers Place to be that with passion for the industry, strong communication and teamwork, and a fire of excitement for the future that lies ahead at Rogers Place.

Sheena Way and her team in live entertainment not only work diligently to bring in the next acts and events at Rogers Place, but they themselves bring energy and excitement to the opening of this remarkable, awe-inspiring building — a place where the community can come together and create ‘I Remember Moments’.

Previous Post
WEEKLY BLOG – Out with the old, in with the new
Next Post
ICE Level: The Feature on the Entertainment Team
Menu