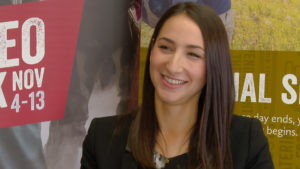 This past Sunday, Part One of “Arena: Building of an Icon” aired on Sportsnet. This two-part documentary series traces the journey of Rogers Place and how this state-of-the-art sports and entertainment venue will act as the catalyst for the revitalization of downtown Edmonton.

This week on PCL ICE Level, Jessica Kent takes a closer look at how Rogers Place is anticipated to affect the tourism industry in Edmonton, invigorating local economic growth. (WATCH ABOVE)

“The opening of Rogers Place has not only transformed our downtown core — it’s changed Edmonton as a city,” said Event Attraction Manager for Edmonton Events, Janelle Janis.

“We’re ranked seventh in the world for a sports city.”

Janis and her team at Edmonton Tourism have witnessed first-hand how the conversation around Edmonton is changing, attracting international buzz.

“Over the last 10 years, we’ve seen Edmonton come to the forefront of international cities,” said Janis. “We’re ranked seventh in the world for a sports city.”

Welcoming guests from Germany, Sweden, France, China and many more from around the globe, Edmonton is making a name for itself as a destination city for those looking to experience extraordinary sports and cultural events in a Canadian setting. 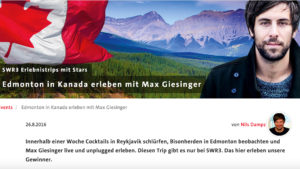 Max Giesinger, German musician and winner of The Voice of Germany will visit Rogers Place on Friday, November 11.

On Friday, November 11, Rogers Place will host more than 50 visitors from Germany attending their first NHL game, as they watch the Edmonton Oilers take on the Dallas Stars. The visitors were selected from over 4 million listeners to SWR3, — one of Germany’s top radio stations — winning a contest to visit Edmonton and experience an NHL game at Rogers Place. Guests will also include German musician Max Giesinger, as well as German radio hosts and DJs. This is just one example of the growing international interest to visit Rogers Place and Edmonton.

“Being able to say we have the most iconic arena in all of North America, that not only gets Edmonton a seat at the table when we’re hosting or bidding on international sport events, it makes us a top contender for them,” added Janis.

“I think Edmontonians are going to be really excited about what’s on the horizon, in terms of new and exciting events in our city.”

Rogers Place has not only evoked a renewed conversation surrounding Edmonton, but it has provided even more opportunities for the city to bid on and host internationally acclaimed events.

With more than 350,000 guests already through the building since the Rogers Place Public Open House on September 10, 2016, and an anticipated 4 million visitors to walk across ICE District’s public plaza annually (once complete), the look and feel of downtown Edmonton has already begun to drastically shift.

“It’s definitely a game-changer for us.” 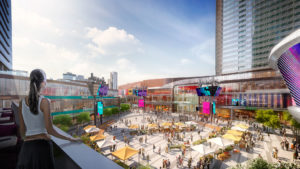 From new shops popping up, to buildings being constructed, Edmonton is witnessing a rapid growth that rivals any changes the downtown core has seen before. This change comes from the numerous catalyst projects — Rogers Place being the centerpiece — that have been set out by the city as a strategy to increase the sustainability, accessibility and vibrancy of downtown Edmonton.

“We’ve never seen Edmonton’s downtown more vibrant than it is today,” said Janis. “It’s definitely a game-changer for us.”

With Rogers Place bringing in new and exciting events to the core of the city, Edmonton has experienced a corresponding economic impact.

“It all helps contribute to Edmonton’s quality of life,” said Janis.

By attracting visitors — both those from within and outside of Oil Country — to the downtown core, local restaurants, hotels and shops are already facing a significant increase in customers spending money at their local establishments.

As Oilers Entertainment Group (OEG) Chief Commercial Officer Stew MacDonald explained, the great number of events that are brought to Rogers Place are namely responsible for the increased spending in downtown Edmonton.

“It certainly starts with the events. This building allows us to bring in a broader selection, higher-end quality events,” said MacDonald. 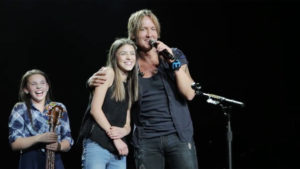 MacDonald added, “We want to deliver the best possible environment for people coming to Edmonton to experience it here — but it’s also the chance to wave the Edmonton flag around the world.

“We certainly surpassed what our expectations were,” he commented on the first days of opening Rogers Place.

Even Keith Urban himself — one of the first artists to headline at Rogers Place — gave the facility a raving review.

“So many arenas are purely built for sport and the concert sound suffers, but not Rogers Place,” Urban said. “It’s one of the best sounding arenas I’ve played in.”