Rogers Place to set a new tone for fan experience 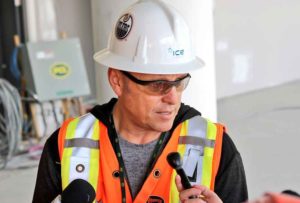 On Sunday, May 29, local media were invited inside Rogers Place for a construction briefing hosted by the City of Edmonton, Oilers Entertainment Group (OEG) and PCL Construction Management.

Rick Daviss, the City’s Executive Director of the Downtown Arena Project, opened the tour by sharing words of appreciation towards the patience of those living in and around the construction area of Rogers Place — “Thank you again to Edmontonians.”

Daviss added, “We remain on time [and] on budget.”

With construction crews working around the clock, PCL Construction Manager, Mike Staines, added, “We are [in] our home stretch!”

With many of the major construction milestones complete, PCL will now shift their attention towards the finishes inside the arena.

Black says it is these finishes that will “set this facility apart” from others. From the striking curves of the architecture along the concourse, to the integration of technology throughout the building, Rogers Place will set a new tone for live entertainment facilities worldwide.

The media had their first chance to see some of those finishes on Sunday, including a peek at one of the Bistro Bars along the main concourse. These bars embrace an open concept, as they open out from the concourse onto the bowl, allowing fans to purchase food and beverages without missing a minute of the play.

Open concept aside, with over 1,200 TV screens throughout the building, you are never more than a few steps away from watching that goal replay or catching another glimpse at that perfect pass.

“We will turn the ice into a canvas.”

The fan experience will continue to be enriched by the final finishes of the building — technologically and otherwise.

Another highly anticipated aspect of this fan experience — in-game presentation.

Black hinted towards what fans can expect to find from in-game presentation this coming season, saying, “We will turn the ice into a canvas.”

Nearing the 100-day countdown to the Public Open House on Saturday, September 10, the end of the first chapter for Rogers Place is in sight.

“We turn more and more lights on everyday,” said Staines.

When asked what was the next step in preparing Rogers Place for opening, Staines said that they would be “pulling the ice slabs down to [the proper] temperatures in preparation for the ice — “we’ll be ready to make ice!”