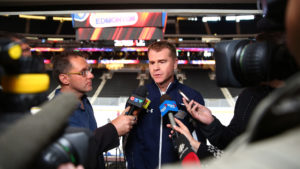 “This is the first sellout in Oil Kings modern-day franchise history.”

The very first regular season hockey game to be played at Rogers Place will take place on Saturday, September 24 between the Edmonton Oil Kings and the Red Deer Rebels.

During a brief press conference held by OEG to announce the exciting news, the Oil Kings could be heard running drills down on the ice.

“Today was the first day we were able to practice on the main ice surface here at Rogers Place,” said Oil Kings General Manager Randy Hansch.

“It’s exciting — it’s contagious and energetic for staff and for the players,” Hansch said.

“This is the start of another amazing era for the franchise.”

The GM discussed the added excitement of a full house of fans to support their home opener against the Rebels.

“To have the crowd support that we’re going to have — it’s all about that development and getting to the next level.”

OEG CEO and Vice Chair Bob Nicholson said, “The Oil Kings are a huge part of our organization.”

“Their connection with hockey fans in Edmonton and across the region runs deep. This is the start of another amazing era for the franchise,” he added in a statement.

“Junior hockey is selling out in an NHL building, in an NHL city. That never happens.” said Kevin Radomski, Oil Kings Director of Business Operations.

For those fans who were unable to obtain tickets for the home opener, the Edmonton Oil Kings will host their second home game on Friday, October 7 against the Kelowna Rockets. Tickets can be found on OilKings.ca.

And for those who are coming to see the Oil Kings home opener?