Some people call him the space cowboy, some call him the gangster of love and some even call him Maurice; but at Rogers Place this past weekend, fans called him Steve Miller.

The Steve Miller Band treated Edmonton to a plethora of classics and guitar wizardry but it was the band’s longtime friend and co-headliner, Peter Frampton, who was responsible for starting the night off right and as expected the guitar legend delivered. Frampton opened his night the same way his best-selling album, Frampton Comes Alive, does with “Something’s Happening” and the first few chords sent a rush of people to their seats. As the seats began to fill, Frampton slowed things down with an extensive version of “Lines On My Face” but before the song, he paused to gladly thank Steve Miller for his “continued relationship over the years and for touring since the 1700s together.”

Frampton was jovial in between songs, often commenting on his age, bantering with front row fans and telling stories of how he wrote specific songs. He spoke glowingly of Soundgarden’s now passed lead singer, Chris Cornell, before he dedicated an instrumental version of “Black Hole Sun” to Cornell and his family. The cover garnered a standing ovation from the crowd after Frampton delivered a magnificent display of guitar brilliance. The set also heavily featured Frampton’s signature guitar talk box, an effect he championed and is most well known for. During “Show Me the Way” the crowd sang along in unison as hundreds of phones popped up, while others chose to revisit their high school prom by dancing in the aisles. The singing, dancing and lighter saluting continued as Frampton finished his set with two more hits – “Baby I Love Your Way” and “Do You Feel Like We Do” – before Steve Miller graced the stage. 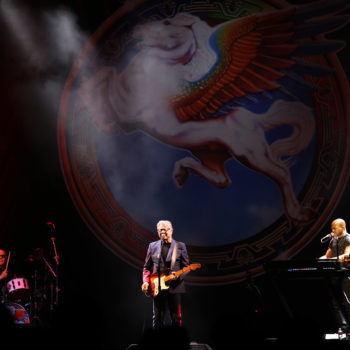 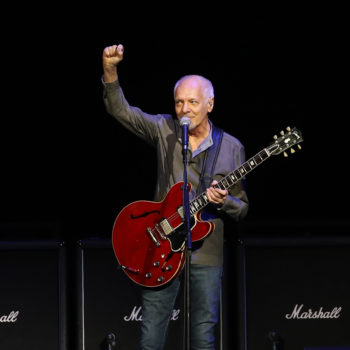 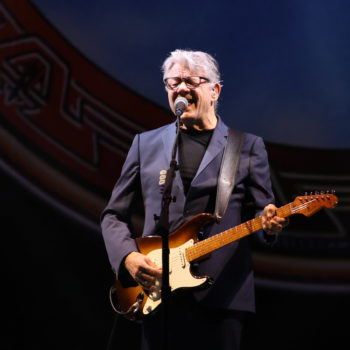 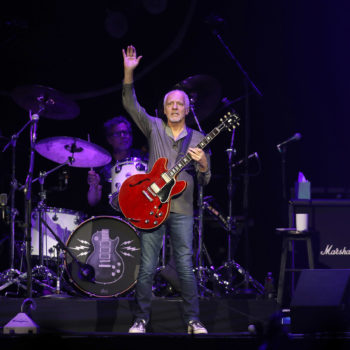 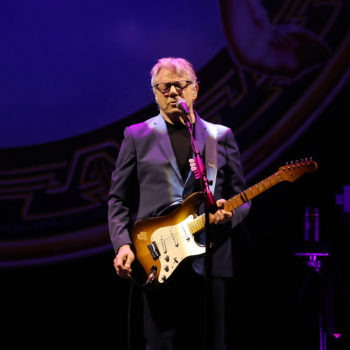 Miller and his band opened their set with a collection of hits, something this Rock N Roll Hall of Fame inductee is not short on – “The Stake”, “Swingtown” and “Take the Money and Run” highlighted the beginning of Miller’s set. Although these are some of Miller’s slower-paced songs, the crowd was thrilled to hear the hits they paid to hear right off the hop. The colourful stage featured Miller’s signature rainbow stallion until Peter Frampton was brought back on stage for a trio of blues tunes and the logo was replaced with a classic velvet stage curtain. The warmth of the lights and backdrop created an intimate atmosphere not unlike one might find in a Chicago blues bar. Albeit on a larger scale, the size of Rogers Place felt minimized for the time being with the crowd brought closer to two guitar legends trading solos and vocal duties during the blues numbers.

After Frampton’s guest spot, Miller returned to the hits with “Dance, Dance, Dance”, “Wild Mountain Honey”, “The Joker” and “Fly Like an Eagle”, except this collection provided more 70s psychedelics with curving lights and a space-themed back drop. Obviously, the crowd sang every word of “The Joker” but it was “Fly Like an Eagle” that allowed Miller to stretch his wings (pun intended) with an extensive guitar solo and keyboard solo from long-time band member Joseph Wooten.

Left with more hits to satiate the audience, Miller’s encore featured “Jungle Love” and “Jet Airliner” to finish off the night. If the audience paid to hear hits they definitely got their price of admission and would’ve undoubtedly left satisfied; however, those fans looking for a legendary guitar display also got their money’s worth. To peg Frampton as the show stealer would be unfair to the performance of the Steve Miller Band, but the fact that it’s a consideration proves that these two are worthy of headliner status and fans were treated to not one, but two stadium-worthy rock titans.