That was the question 10-year-old Bradley Welland posed to his mom, Melanie, when he found out he would be the recipient of a wish from the Make-A-Wish Foundation.

“It was nothing about trips, it was all, ‘I want to meet Connor McDavid and I’d love to skate with him,’” explained Melanie.

A die-hard fan since the age of five, Bradley’s passion runs thicker than oil, having rooted himself to his beloved team when his dad, Greg, took him to see his first Battle of Alberta game at Scotiabank Saddledome.

“They were going as Flames fans,” said Melanie. “The Oilers just slammed the Flames. I think they ended up winning, he said, 6-1, or something like that. From that point on, Bradley’s liked nobody but the Oilers.”

Unfazed by the expectation that your geographical location means you cheer on the hometown team, the little Calgarian continues to sport the orange and blue colours with pride.

So, when the largest wish-granting organization in the world came knocking, he didn’t hesitate.

It’s a reaction that is not all that unfamiliar to Leanne Gullekson, Communications and Marketing Officer for Make-A-Wish Northern Alberta.

“For kids, it can be a real game-changer, especially for kids who are in the middle of treatment,” she said.

There may not have been an actual waving of a wand, but his wish, as well as several others from Make-A-Wish and The Rainbow Society of Alberta, was granted Wednesday.

The day began when Oilers goaltender Cam Talbot’s surprise video message welcomed Bradley and five other wish children and their families to Rogers Place and into the folds of their team’s tight-knit crew. 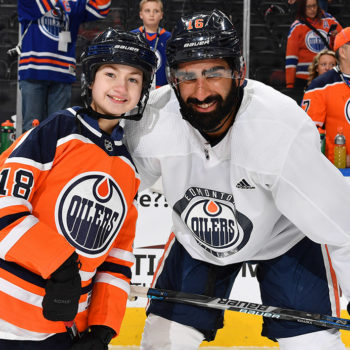 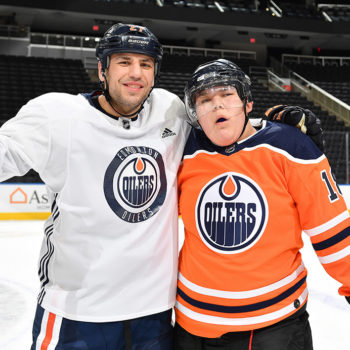 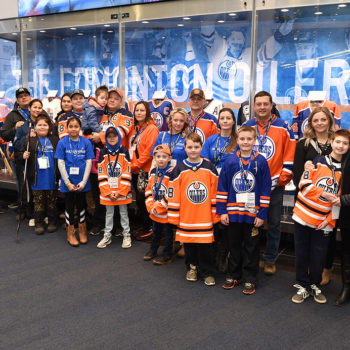 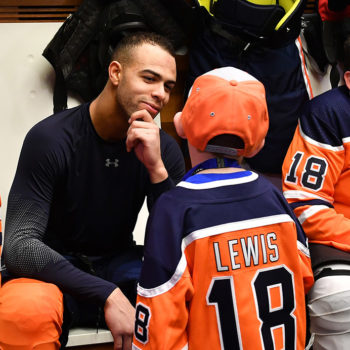 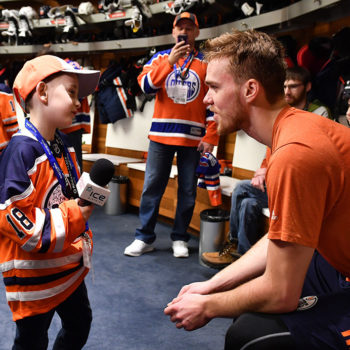 “After a game like last night it was almost kind of something that we needed,” said Talbot.

“It puts things into perspective — having little ones at home myself — [seeing] how much joy it brings to these kids and seeing the smiles on their faces, you know that it means a lot to them and their families and it means a lot to us as well. I think we not only put a smile on their faces today but they helped us out today too. I think today was good for everybody.”

Sporting their very own, personally crested Oilers jersey atop their hockey gear, the kids were eager to join the big-league players on the ice as they filed out of the change room to walk down the players’ tunnel in their own miniature version of the game-night march.

“I thought it was awesome,” said Bradley, rosy-cheeked, dressed head to toe in his hockey gear, smiling from ear to ear while sporting his Springbank Rockies Green team helmet.

In 2007, Bradley was diagnosed with cystic fibrosis (CF) at just 12 weeks old.

“He was three months old, and I got a phone call from his doctor, our family doctor, saying one of his [newborn screening tests] came back positive,” said Melanie. “No alarm. It can happen for lots of reasons, but they needed him at the children’s hospital for further gold standard testing for something called cystic fibrosis.”

CF is the most common fatal genetic disease that mainly affects the digestive system and lungs in Canadian children and young adults. Though the degree of CF’s severity can differ from person to person, at present, there is no cure.

“We were in denial, thinking there’s something else going on,” said Melanie. “You’re in denial as a new mom. We took him over and sure enough, he was super positive. The salt chloride content in his sweat was in the 90s, and I think people without CF, it’s in the 20s, if not lower, so he was…that was our diagnosis.”

In one day, Bradley’s diagnosis was confirmed and so too his treatment.

Though the Wellands were thankful it was discovered early, Melanie said it did begin what will be a life-long treatment regimen for Bradley that includes trips to the clinic every three months, regardless if he’s sick or not, at home physiotherapy for his lungs every day and pills that must be taken with every meal.

But throughout all of that, it hasn’t stopped his busybody from moving, continuing to participate in all kinds of sports from baseball to golf, swimming to skiing, and of course, playing his much-beloved hockey and cheering on his favourite player, a certain Captain, on his favourite team.

“On a day like today…it reminds us that there’s a lot more to this than just being a hockey player,” said Connor McDavid. “Seeing the smiles on everyone’s face…it brings a smile to your face.”